I’m so excited to team up with a group of bloggers to share some Easter activities with you today! 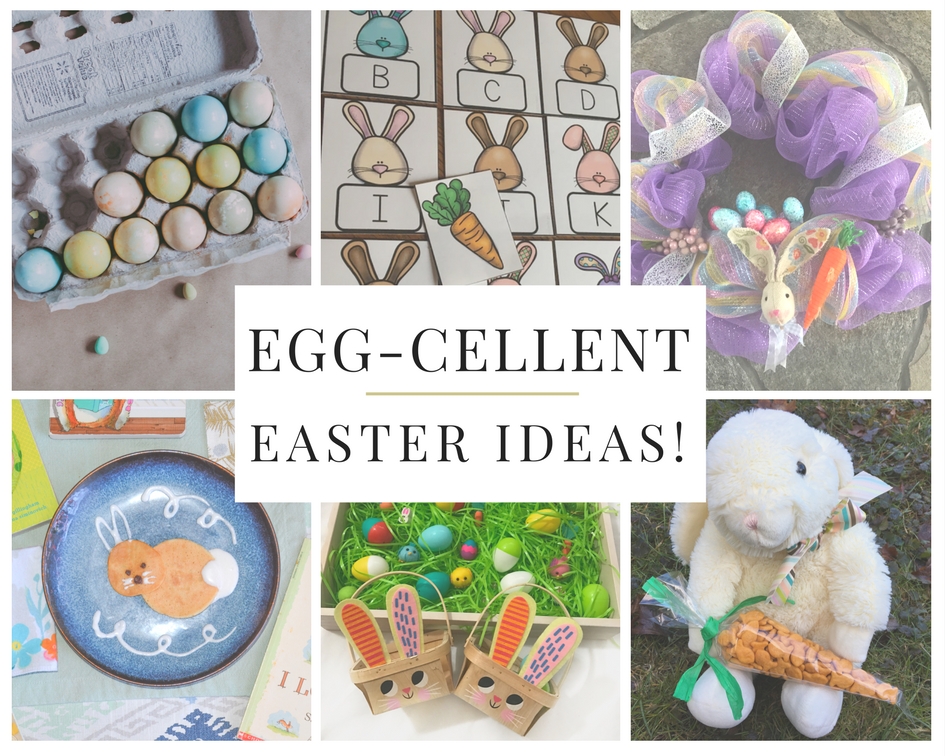 As a former kindergarten teacher who is now a SAHM, I’m always looking for ways to incorporate some learning into our everyday lives.  I have a two year-old who knows most of her uppercase letters and a five year-old who is starting to read, so I’m also busy finding and making activities that both of them can learn from.
One of my former students’ and my own children’s favorite activities are hide-behind activities like my “Where’s the Gold?” St. Patrick’s Day activity.  I found the cutest bunny clipart and HAD to make an activity with it, so I came up with this “Where’s the Carrot?” alphabet game!  The best thing about this game is that you can really change it up and play it in a variety of ways.  I use the uppercase letter cards with both of my girls, and I use the lowercase cards with my five year-old to add some difficulty. 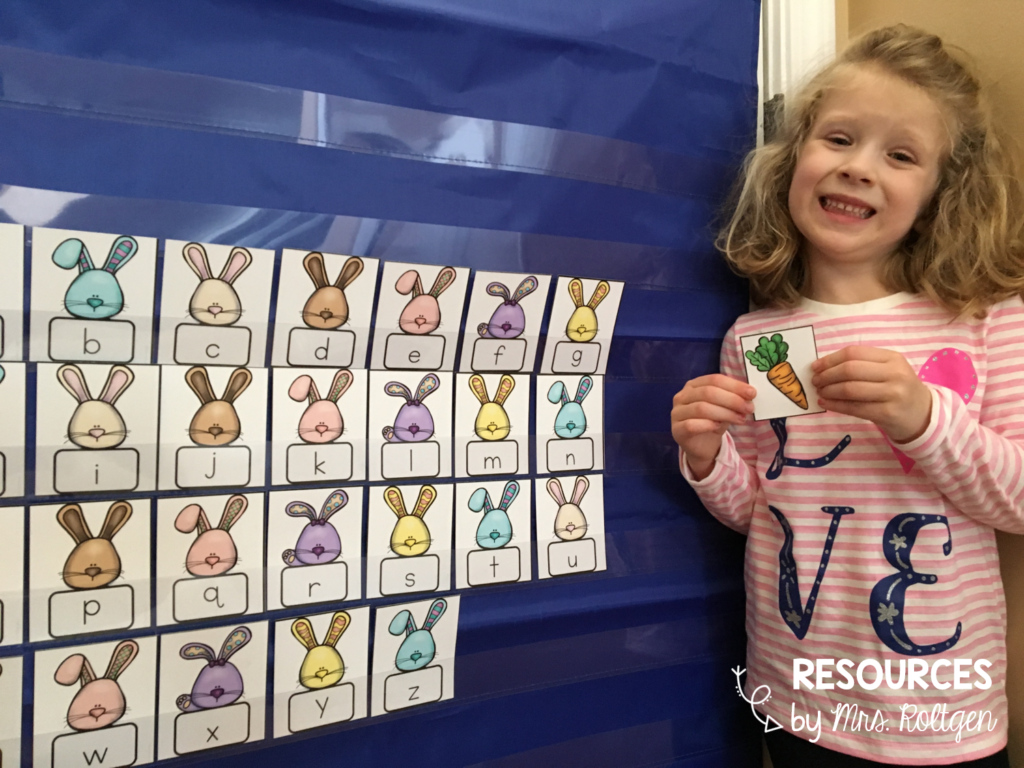 The first activity that you can do with the bunny cards is a classic hide-behind game.  I had my girls cover their eyes while I hid the carrot behind a letter.  Then they took turns guessing which letter the carrot was hiding behind.  I will point out that it’s important to have the child(ren) verbalize the letter, not just point to it.  That way, you can really make sure they know their letters.  There are a few letters my two year-old still struggles with, so I let her point to a letter if she didn’t know it and then we practice the letter a couple times before I lift it up to see if the carrot is there. 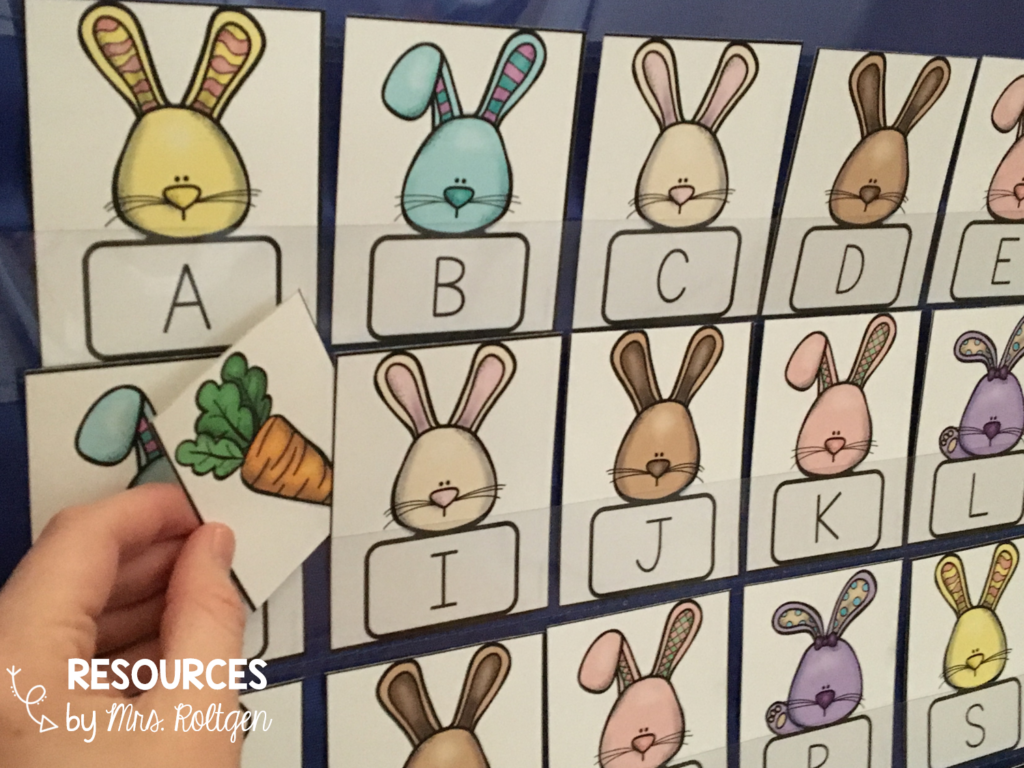 After I played with my girls a couple times, they wanted to keep playing together so they took turns hiding the carrot.  My two year-old had fun covering her eyes while her big sister hid the carrot! 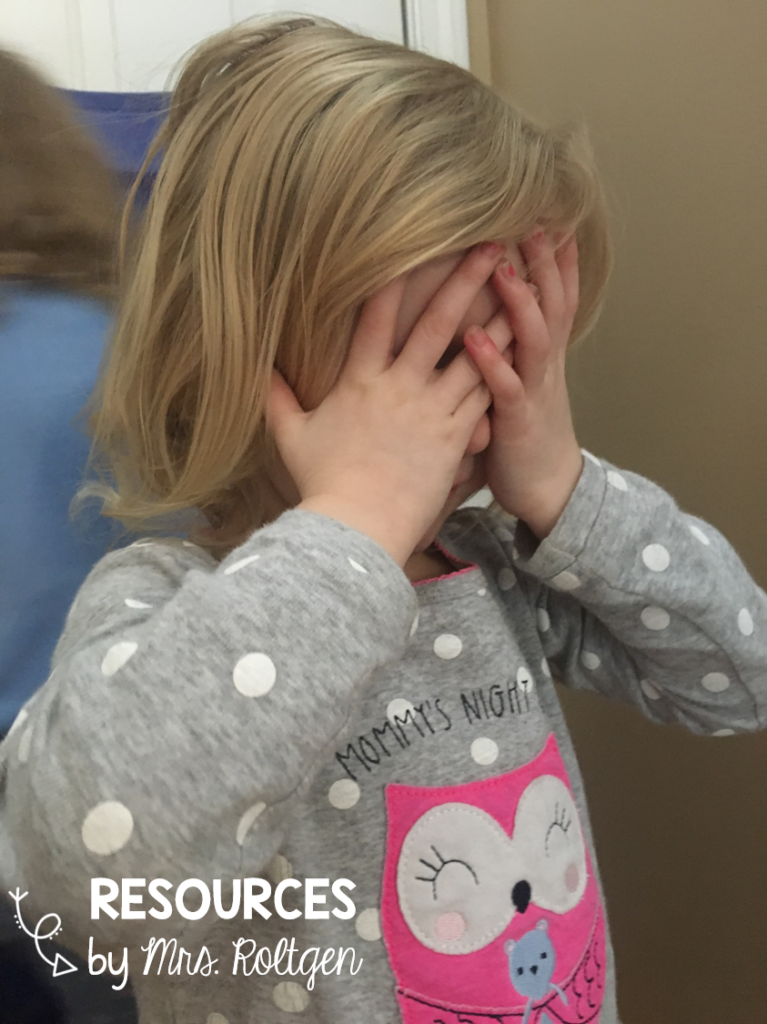 Also, I hung up a pocket chart on our front door and we used that to play the game.  However, if you don’t have a pocket chart, this game works perfectly fine on a table or on the floor! 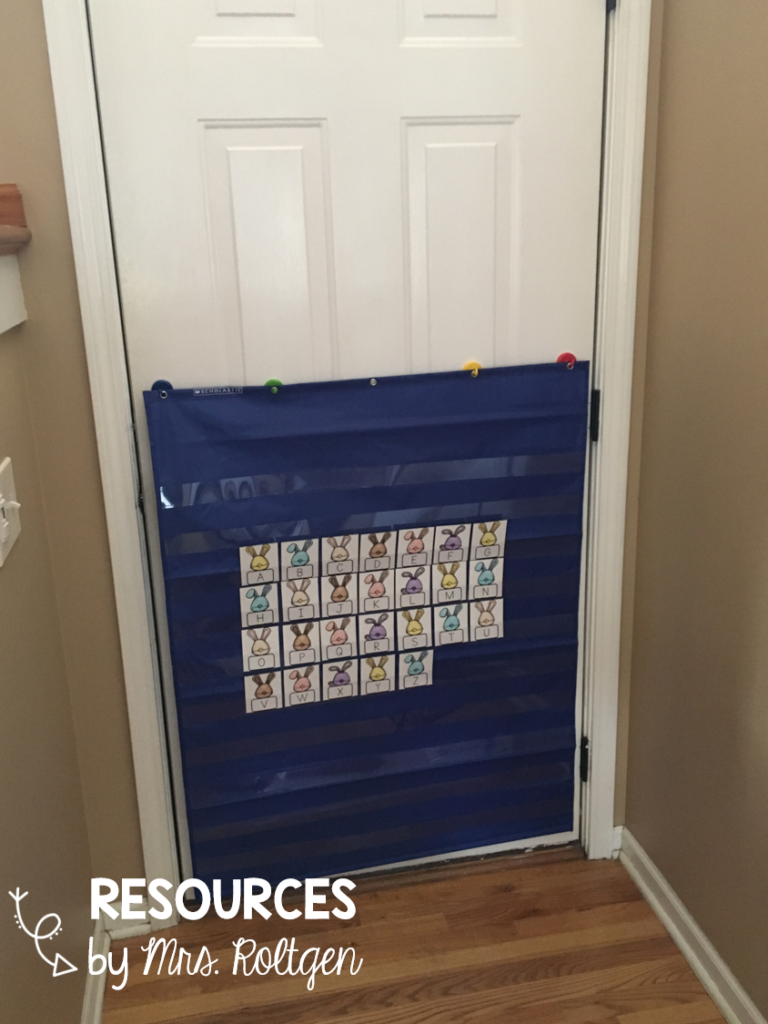 My five year-old and I played the game while my two year-old was napping, and we played with the lowercase letter set.  To make it a little more challenging, I had her call out the letter sounds instead of the letter names.   When we’re done playing, I also have her put the letters back in order to work on alphabet order. 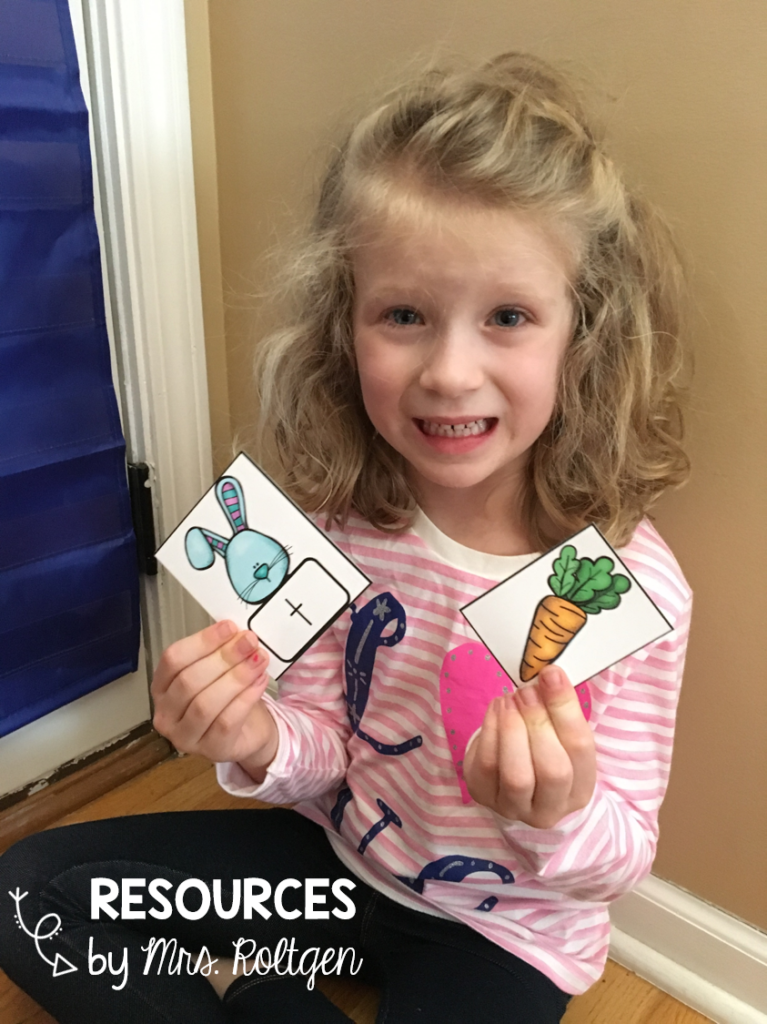 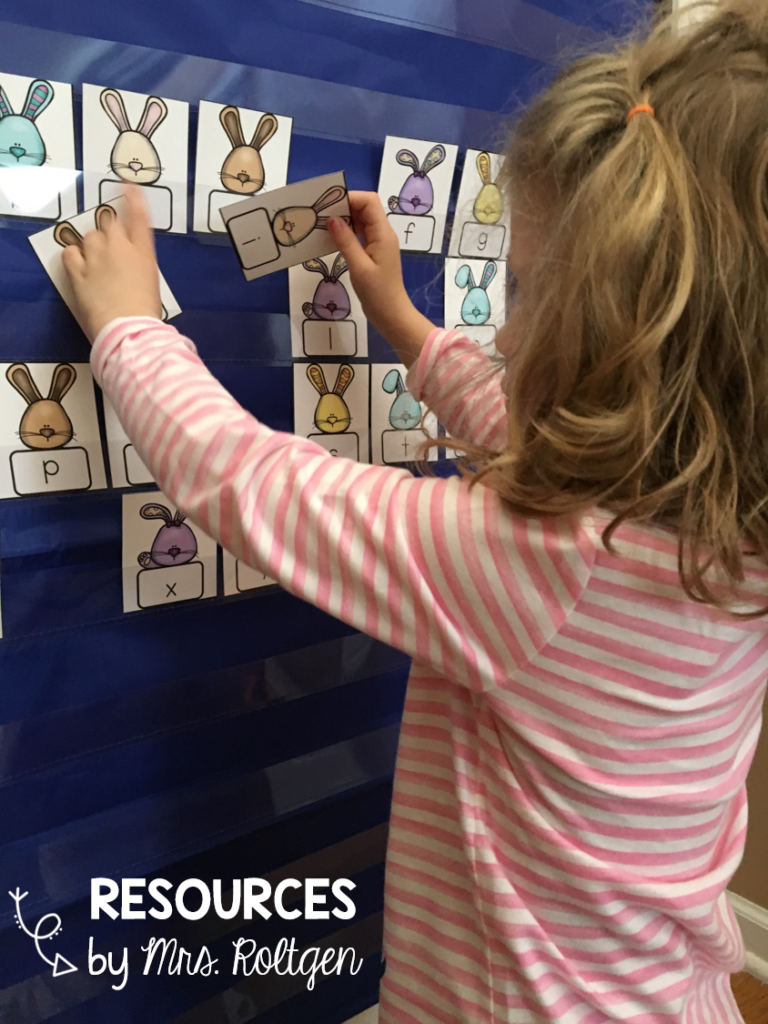 If you want to make the game easier, you can just pick a handful of letters to use.  When my two year-old and I played the St. Patrick’s Day version of this activity a few weeks ago, I picked the letters in her name plus six letters that she’s still working on.
Since I included uppercase and lowercase cards, you can also use the cards in a memory game!  Just print off both sets of cards and remove the carrot cards. 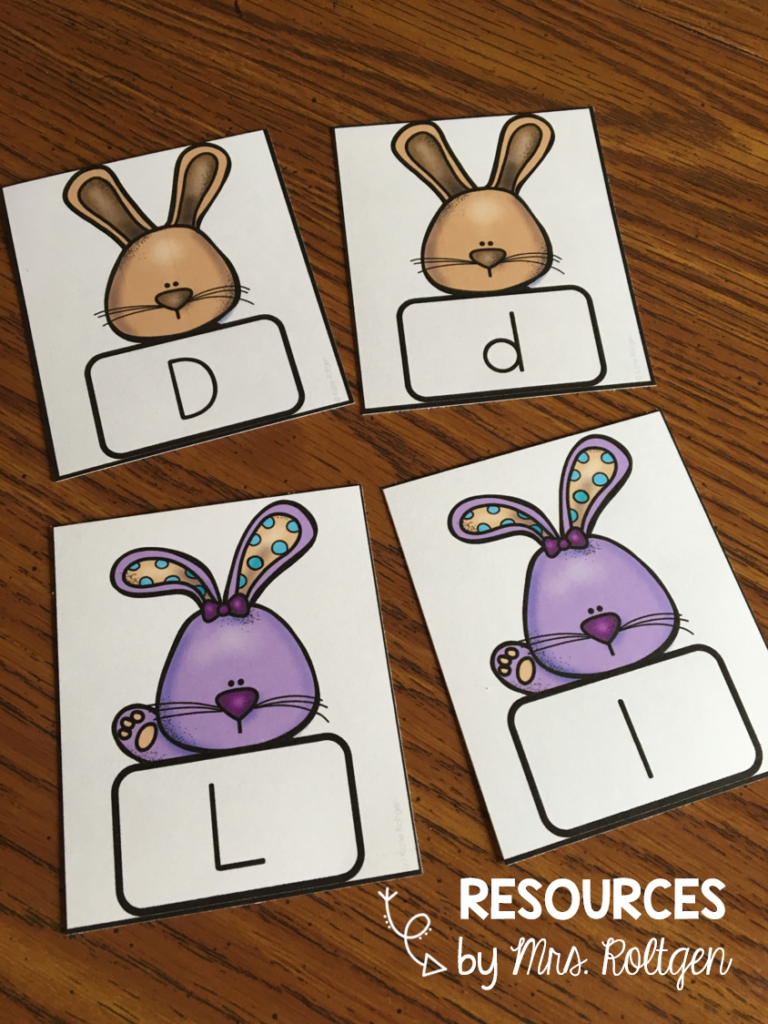 This activity is available to download on Dropbox by clicking here! 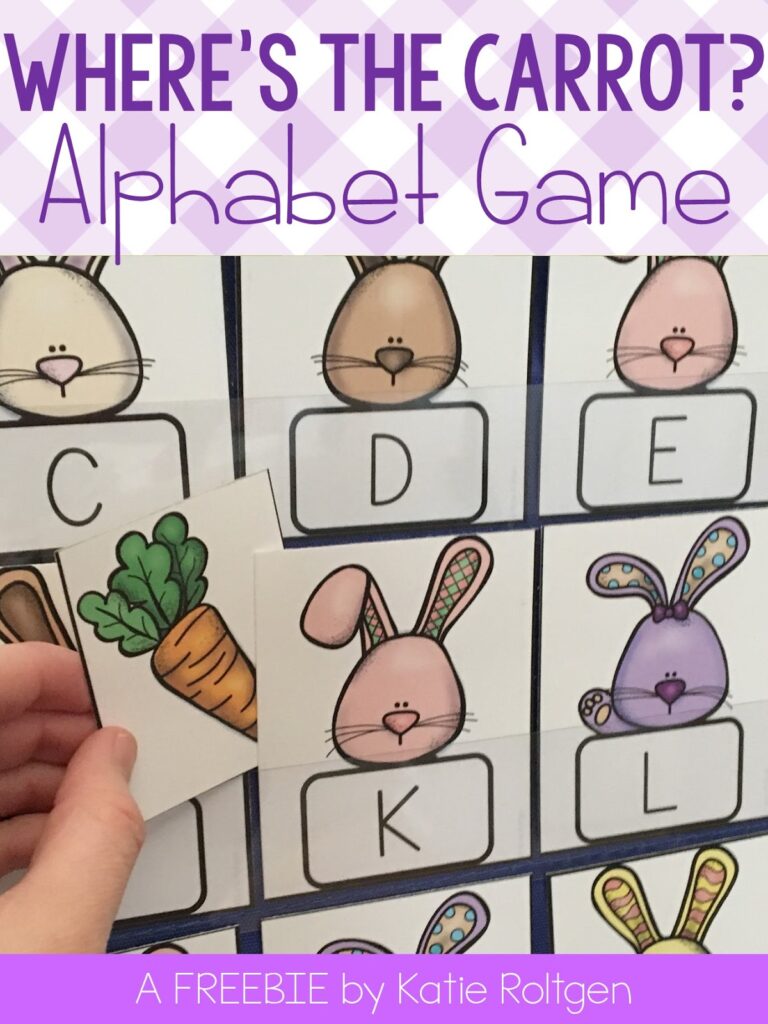 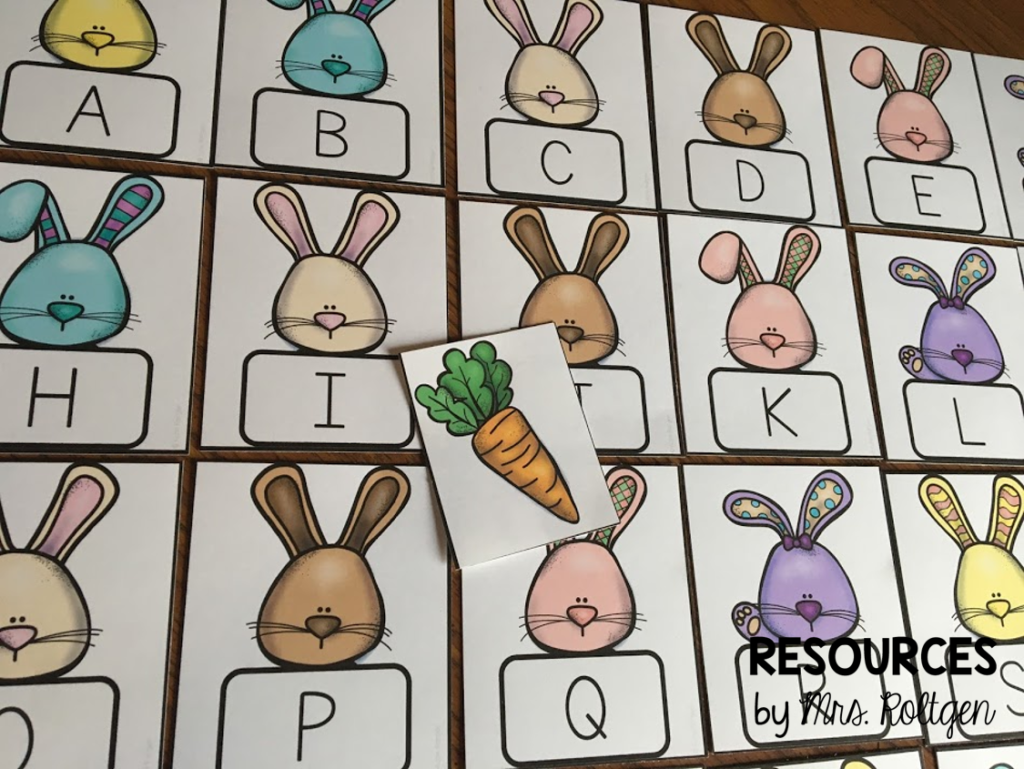 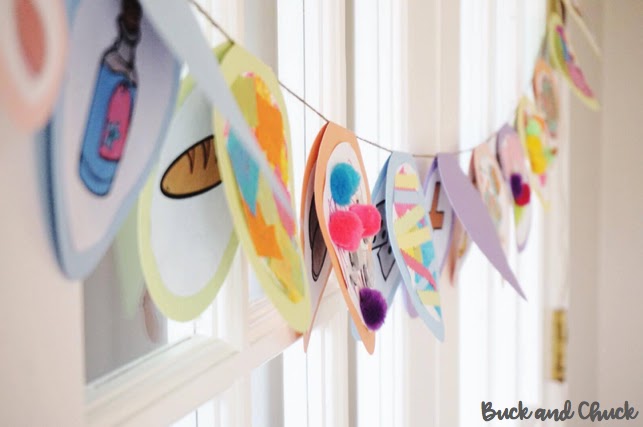 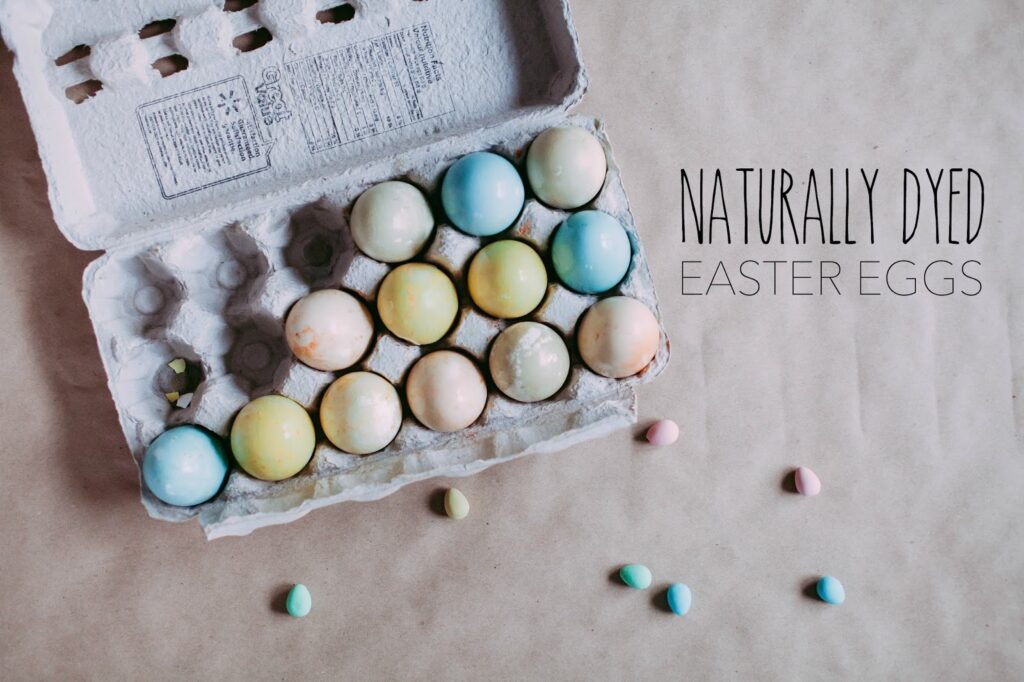 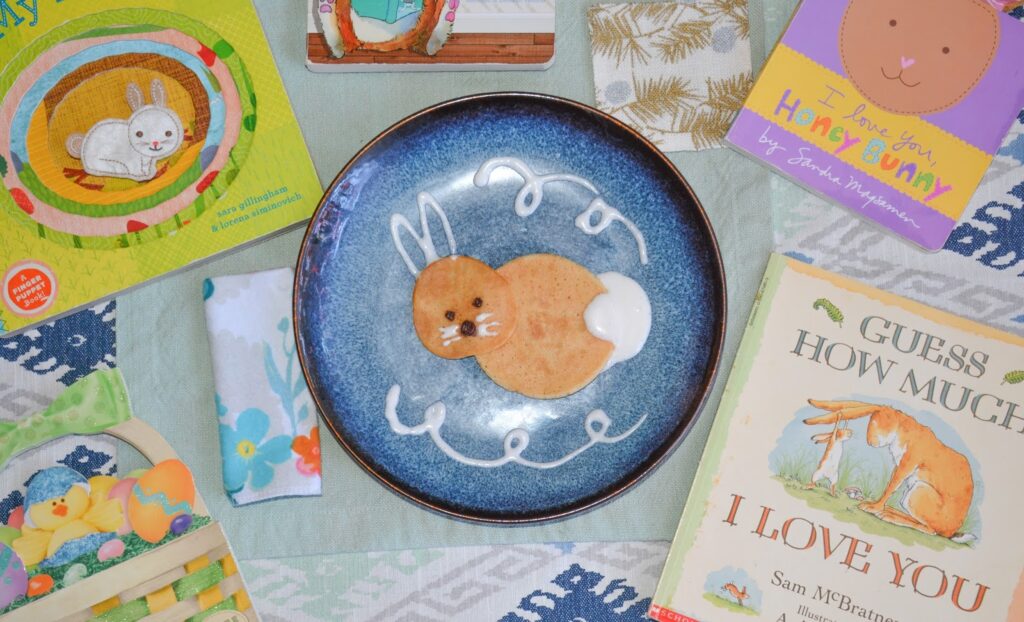 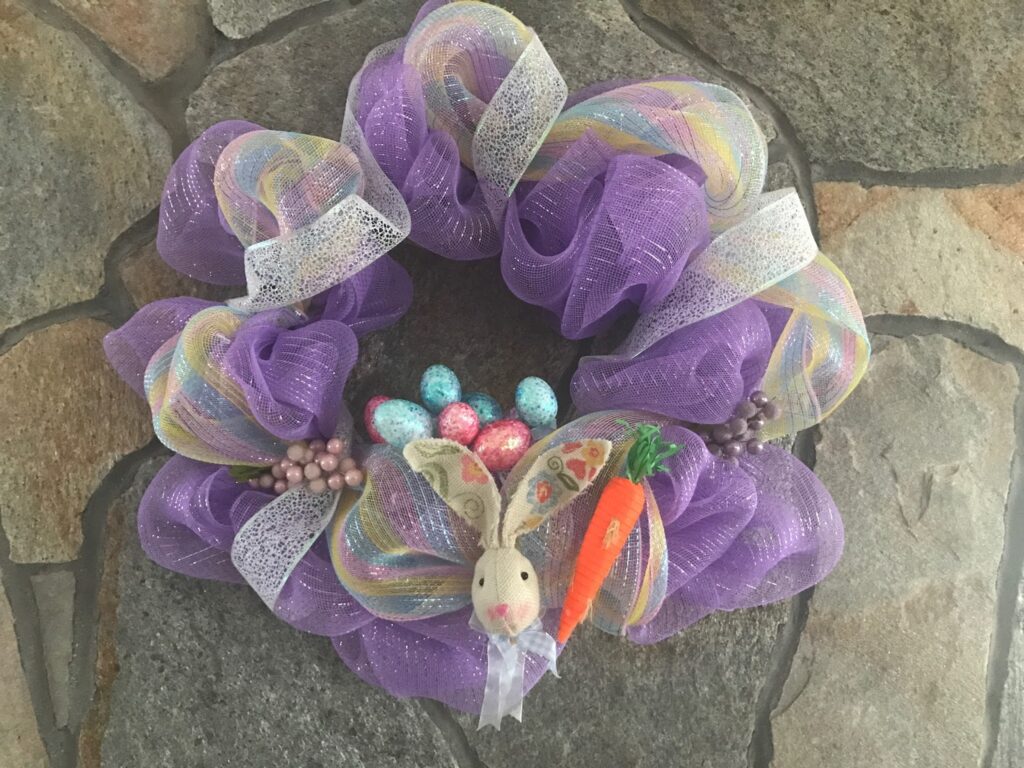 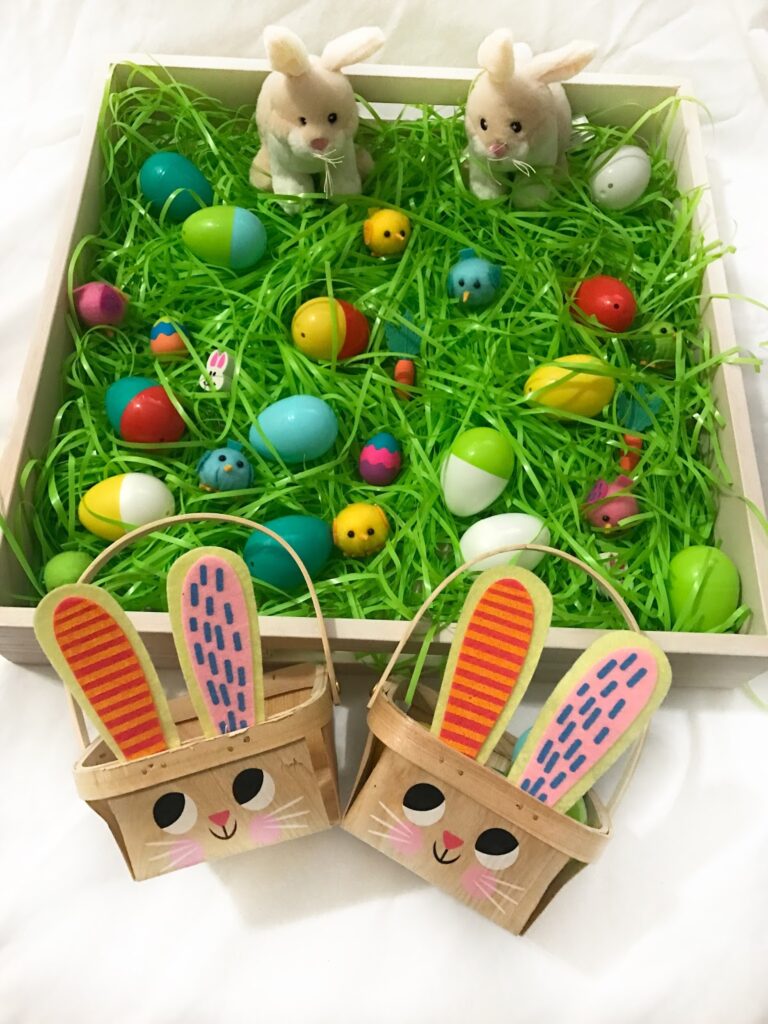 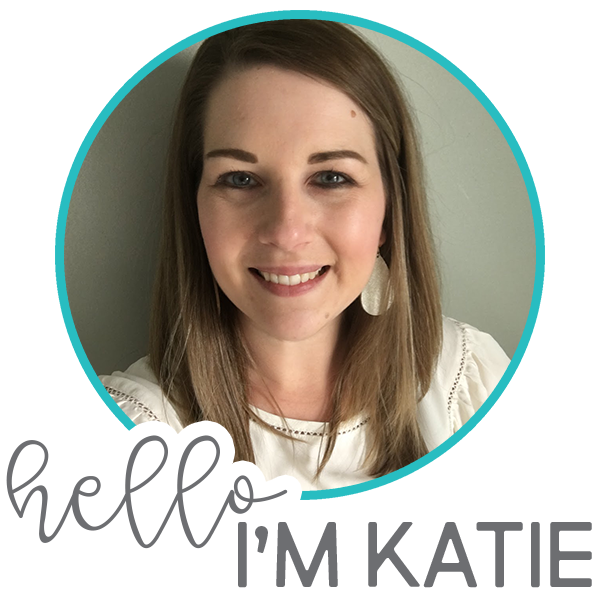 🤭 Why aren't there any knock-knock jokes about

Want to give your kiddos something to work on over

Current Mood: Cue the sparklers and this fun, Four

Let's get the 𝘴𝘰𝘳𝘵𝘦𝘥 out with th

🎆 Cause baby you're a FIREWORK!!⁣ ⁣ These F

🤓Don't get 𝘱𝘶𝘻𝘻𝘭𝘦𝘥 about t

😍My ENDLESS LOOOOVVVVEEE!⁣ ⁣ My love is end

Happy Father's Day to all of the amazing fathers a

I have an EXCITING update!If you purchased my Print Cut Play Literacy Games growing bundle, it is now complete!Plus, there are 25 more games than I had originally planned. I got a little carried away... 😁You can download the entire 77-game bundle below OR grab it for 50% off through Friday. 🎉www.teacherspayteachers.com/Product/Kindergarten-Literacy-Games-Bundle-5503294 ... See MoreSee Less

New on the blog: FREE Thank You Card Templates!By the end of the school year, your students will have spent lots of time working with other teachers and staff members. Making thank you cards with your students is a fun and meaningful writing activity!Download the free templates here: katieroltgenteaching.com/thank-you-cards-for-staff-appreciation-free-download/ ... See MoreSee Less

These FREE thank you cards are the perfect way for your students to say thank you to paras, school nurses, specials teachers, and more!
View on Facebook
· Share

So, I wanted to take some pictures of my May Morning Kits to let you all know that they’re finally done and in my store, but my furry helper had other ideas. 😹 I originally created Morning Kits as a morning tubs alternative for the 2020 school year, but they work really well for a “normal” school year, too!Grab May Morning Kits here: www.teacherspayteachers.com/Product/May-Morning-Kits-7955021 ... See MoreSee Less